Drive along any country road in southern Maryland and you are sure to see examples of this region’s distinctive agricultural architecture.  These large vertical sided barns, constructed for the air curing of tobacco, are important reminders of Maryland’s agricultural history.  A less iconic type of reminder—the humble white clay tobacco pipe—does not have the visual impact of the barns, but is present on virtually all archaeological sites dating from the seventeenth to the nineteenth centuries.  The Maryland Archaeological Conservation Lab has tens of thousands of pipe fragments in its collections.  This pipe, from the late seventeenth-century King’s Reach Site (18CV83), is one of our more complete examples; the very fragility of the unglazed, low-fired clay means that they are often found broken into numerous fragments.  I have chosen this simple clay pipe to represent the role that tobacco cultivation played in Maryland’s history.

Agriculture was the primary factor shaping the early Maryland Chesapeake, and within that agricultural framework, tobacco was king.  The fashion for “drinking tobacco”, as smoking was known, took hold in England in the last half of the sixteenth century for its reputed medicinal benefits, as well as for pleasure (Dunhill 1954; Everard 1659).  The English demand for “sotweed” was considerable and the Chesapeake’s climate, with its hot summers and temperate winters, was particularly suited for its cultivation (Morgan 1998:33).  Colonists rushed to establish tobacco plantations, even delaying the construction of durable homes in order to acquire as much land and labor as possible (Carson et al. 1981).  By 1671, the Chesapeake (both the Virginia and Maryland colonies) exported between 15 and 17 million pounds of tobacco annually (Menard 1980:136).

Tobacco cultivation affected settlement patterns in the Chesapeake.  Since tobacco rapidly depleted soil fertility, the acreage demands of this crop, coupled with field rotation methods employed by planters, required that large tracts of land be set aside for future tobacco fields (Morgan 1998:33).  Plantations tended to be distributed along navigable rivers and creeks, where the land was fertile and where English ships could purchase the cured tobacco directly from plantation wharves.  Since there was no need for large commercial centers for selling the crop, few towns developed in the early colonial period. 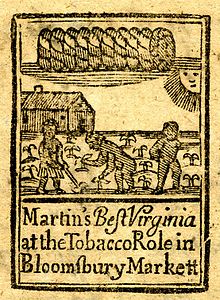 In addition to shaping the physical form of settlement, tobacco also shaped the labor needs of the Chesapeake. Throughout most of the seventeenth century, indentured servants from England supplied the need for agricultural workers.  But as numbers of English laborers diminished over the course of the century, planters found themselves facing labor shortages.  Efforts to enlist Native Americans as workers had never been very successful and increasingly, colonists turned to African labor.  At first, these Africans were considered indentured servants, like their English counterparts, but over the course of the century, their legal status deteriorated until laws were passed that made them slaves for life.

In the eighteenth century, Chesapeake agriculture underwent changes that reflected a combination of demographic, environmental and economic factors.  Long settlement in the Tidewater meant there was little new land available for purchase, necessitating the colony’s expansion to the west.   Decreasing yields of tobacco from the depleted soils of the Chesapeake region, combined with fluctuating tobacco prices around the turn of the eighteenth century, led planters to diversify their agricultural base.  In the 1720s and 1730s, many planters began to alternate between tobacco and grains, such as corn and wheat, whose prices were more stable than those of tobacco.

The Overlook Barn at JPPM is a good example of a southern Maryland tobacco barn.

Farmers in Maryland’s Chesapeake constructed large, airy barns for air curing tobacco, using curing methods perfected in the late seventeenth century (Miller 2001:34).  Some experimentation with flue curing occurred during the nineteenth century, but this method had largely been abandoned by around 1880, since the financial returns on the flue-cured tobacco did not justify the cost of the required equipment (King 2001:46-48). The United States Census stated that in 1850 tobacco was being grown in every county in Maryland, with a yield of over 21 million pounds that year (Kennedy 1864:xcvii).  By the late 1970s, production was confined largely to the five counties considered to make up Southern Maryland:  St. Mary’s, Prince George’s, Charles, Calvert and Anne Arundel (Street 1978).

Approximately 5,000 tobacco barns remain standing in Southern Maryland.  Today, these tobacco barns are considered an endangered cultural resource, making the National Trust for Historic Preservation’s 11 Most Endangered Historic Places List in 2004 (Preservation Maryland 2013).  Several factors have contributed to their current status.  Over the last fifty years, an explosion of commercial and residential development in the counties surrounding metropolitan Washington has taken thousands of agricultural acres out of cultivation.  But the real death knell for the barns was the “tobacco buyout”, a state policy enacted in 2001 to discourage the production of tobacco. When the program began, more than 1,000 farmers grew tobacco; a figure that had declined to approximately 150 by 2004 (Gately 2004).  Unfortunately, the open and airy design of these barns, which made them perfect for air curing tobacco, makes them very difficult to repurpose for other uses.

Tobacco shaped the history and landscape of Maryland for the last 370 years, and today, even in its absence, continues to affect southern Maryland, as former tobacco farmers experiment with new crops and ways to make a living off of the land.

1659  Panacea, or, the Universal Medicine Being a Discovery of the Wonderfull Vertues of Tobacco Taken in a Pipe, with Its Operation and Use both in Physick and Chyrurgery.  London.

1998  Slave Counterpoint: Black Culture in the Eighteenth-century Chesapeake and Lowcountry. Published for the Omohundro Institute of Early American History and Culture, Williamsburg, Virginia, by the University of North Carolina, Chapel Hill.

2 thoughts on “The Role of Tobacco Agriculture in Maryland”