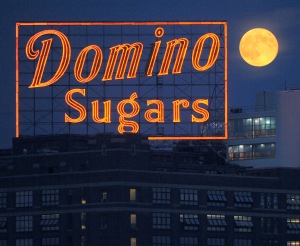 The supermoon of August 2014 competes with the Domino sign on the waterfront in Baltimore. Photograph Jerry Jackson of the Baltimore Sun. http://darkroom.baltimoresun.com/2014/08/
supermoon-seen-around-the-world/#1

Domino Sugar, with its iconic neon sign, has been a Baltimore institution for over 90 years.  The plant was built in 1922, but Baltimore’s sugar history extends back to the late eighteenth century.  After becoming a major port of entry for raw sugar during the Revolutionary War, Baltimore took its place as a regional center for sugar production, with eleven refineries in operation by around 1825 (Williams et al. 2000; Magid 2005).  Similar refineries in Washington D.C. and Alexandria, Virginia were all established in the early nineteenth century in reaction to international trade restrictions imposed by the Napoleonic Wars (Williams et al. 2000:279).

Among the archaeological collections curated at the Maryland Archaeological Conservation Lab is an assemblage from the sugar processing plant owned by Augustus Shutt and John Tool, in operation between 1804 and 1829 on Green (now Exeter) Street in Baltimore (Magid 2005). END_OF_DOCUMENT_TOKEN_TO_BE_REPLACED

Note from the author:  I would like to thank Justine Schaeffer, Naturalist/Director at the Benjamin Banneker Historical Park and Museum for reading a draft of this blog and correcting several errors.

Sometimes artifacts that aren’t all that impressive in appearance turn out to have really interesting histories.  The circular fragment of glass in Figure 1 is a ground lens from a telescope or similar optical instrument.  The objects surrounding the lens are slate pencils, used for marking on slate tablets.  What makes these artifacts notable is that they were excavated from the eighteenth-century home of Benjamin Banneker (Hurry 2002).  A self-taught astronomer and mathematician, Banneker is known as America’s first African-American man of science.  He was born in 1731 to free parents in Baltimore County, Maryland and grew up on a small farm in present-day Oella (18BA282).

Taught to read and write by his grandmother, an English woman who married a former slave, Banneker later attended a small Quaker school (Bedini 1972:39).   As an adult, Banneker became friends with George Ellicott, son of a nearby land and mill owner.  The Ellicotts were Quakers who contracted with the Banneker family to provide their mill workers with produce.  Although twenty-nine years Banneker’s junior, George Ellicott shared many of Banneker’s   interests.  END_OF_DOCUMENT_TOKEN_TO_BE_REPLACED

Drive along any country road in southern Maryland and you are sure to see examples of this region’s distinctive agricultural architecture.  These large vertical sided barns, constructed for the air curing of tobacco, are important reminders of Maryland’s agricultural history.  A less iconic type of reminder—the humble white clay tobacco pipe—does not have the visual impact of the barns, but is present on virtually all archaeological sites dating from the seventeenth to the nineteenth centuries.  The Maryland Archaeological Conservation Lab has tens of thousands of pipe fragments in its collections.  This pipe, from the late seventeenth-century King’s Reach Site (18CV83), is one of our more complete examples; the very fragility of the unglazed, low-fired clay means that they are often found broken into numerous fragments.  I have chosen this simple clay pipe to represent the role that tobacco cultivation played in Maryland’s history. END_OF_DOCUMENT_TOKEN_TO_BE_REPLACED

This week’s blog post features a spectacular pre-Columbian pottery vessel known at the Maryland Archaeological Conservation Lab as the Rosenstock Pot. I have chosen this vessel to frame an essay about the development of agriculture by Maryland’s indigenous population and the consequences of agriculture on native life during a time archaeologists call the Late Woodland period (AD900 to AD1650).

The Rosenstock Site (18FR18) is a Late Woodland period village on the Monocacy River in Frederick County. Excavations there by the Archeological Society of Maryland and the Maryland Historical Trust revealed remains of trash-filled pits, hearths, human burials and two buildings believed to have functioned as sweat lodges. Radiocarbon dating of charred plant remains from hearth features showed the site was occupied from AD1335 to around AD1400 (Curry and Kavanagh 2004). END_OF_DOCUMENT_TOKEN_TO_BE_REPLACED