The following article is part of JPPM’s ‘Curator’s Choice’ series.

During the mid-19th century, Irish immigrants flocked to  America to escape the Great Irish Potato Famine (Figure 1).  The famine, which lasted from 1845 to 1852,  was brought on by potato blight, a disease that devastated the potato harvests  across Europe.  In Ireland, where  approximately one third of the population was entirely dependent on the potato  for food, the famine reduced the population by almost two million, many of whom  immigrated to the United States (Irish Potato Famine 2012). END_OF_DOCUMENT_TOKEN_TO_BE_REPLACED 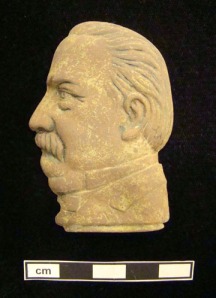 This small, decorative object depicting the profile of President Grover Cleveland is the partial remains of a match safe recovered from the Jackson Homestead site, an African-American site in Montgomery County, MD. The complete object, measuring 6.5 cm by 4.5 cm, would have had a matching profile on the opposite side and a hinged lid at the neck. Match safes were small, portable metal cases used to keep matches dry and, since early matches could be unreliable, a match safe also prevented accidental ignition. They came into use in the 1830s and were particularly popular between 1890 and 1920. Match safes of political figures were common as campaign items.