Over the last several years, the sesquicentennial of the Civil War has been garnering a lot of attention. But the years 2012 to 2014 also mark the commemoration of another of our nation’s wars—albeit one that has not received nearly as much notice as the more famous War Between the States. Two cannonballs from the lab collections, recovered from military sites related to the War of 1812, are our window into this war in Southern Maryland. 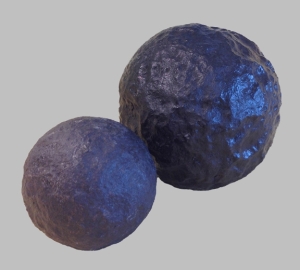 The larger cannonball was recovered at Benedict and the other from St. Leonard Creek.

Despite a name suggesting otherwise, the War of 1812 was a conflict between the United States and the British Empire that actually spanned 32 months between 1812 and 1815. Trade restrictions imposed by Britain due to their war with France, the forced recruitment of American sailors into Britain’s Royal Navy and British support of American Indian tribes against American expansion were some of the provocations that led President James Madison to declare war in June of 1812 (Stagg 1983). American support for the war was far from unilateral. The conflict came at a time when some Americans still felt loyal to the British Crown; others felt the young nation was not prepared militarily or economically for the conflict. Geography also played a role in people’s views; since many New Englanders were dependent on trade with the British, they tended to oppose the war. Although much of Southern Maryland and the Eastern Shore supported the anti-war Federalist Party, Baltimore merchants purchased more than $3 million in government war bonds and raised additional funds for the city’s defense.

While battles occurred in various North American theatres (the Great Lakes region, Maine, Canada, Tennessee, Louisiana, and the Missouri, Indiana and Illinois territories), this blog post is only concerned with action in the Chesapeake region. By early 1813, the British Navy had set up a blockade of the Chesapeake Bay, whose proximity to Washington DC made control of the waterway advantageous. Not only was the blockade devastating to trade in the states along the Bay, British troops also conducted raids of towns up and down the coast, destroying property and angering citizens. The United States, having won its freedom from Great Britain a mere 29 years prior, had not yet established a Navy with which to defend its interests. Revolutionary War hero Joshua Barney presented a plan to the Navy Department for the establishment of the “United States Chesapeake Flotilla”, eighteen vessels consisting of gunboats, barges and sloops. Commodore Barney’s original plan for the fleet to open the Chesapeake Bay was unsuccessful, but it did engage the British in the summer of 1814 in what turned out to have been the state’s largest naval engagement. 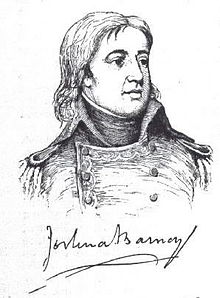 War action in Southern Maryland was a prelude to the August 1814 British invasion of Washington DC, as the British used this area as a staging ground for the assault. After a brief skirmish at Cedar Point with the newly-launched Flotilla, the British pursued the American fleet into the Patuxent River in early June of 1814. They exchanged fire over the course of three days in what became known as the First Battle of St. Leonard Creek. The battle began on June 8, with the British firing long range rockets at the Flotilla, inflicting some injuries and vessel damage. The British then moved into St. Leonard Creek, attacking the American land and water forces. Under heavy fire from the Flotilla, the British withdrew back down St. Leonard Creek towards the Patuxent, followed by Barney and his men (Eshelman 2005:13). The Flotilla inflicted devastating damage on some of the British ships, but was forced to retreat under fire from the much larger British warships.

In an attempt to lure Barney from his position in St. Leonard Creek, the British began to raid and destroy plantations and towns on either side of the Patuxent River. Since British warships anchored at the mouth of the creek effectively trapped the Flotilla, the Americans devised a plan to attack from land and water. On June 26th, the British fleet was bombarded by the Flotilla and American shore artillery in the Second Battle of St. Leonard Creek. Thirty six British and American vessels were engaged in the battle, with over 600 British shot fired against the land battery (Eshelman 2005:16). No clear victor emerged in the battle and Barney’s Flotilla withdrew to Benedict.

In mid-August of 1814, the British landed forces at Benedict in preparation for marching overland to the nation’s capitol. As a diversionary tactic, a smaller British fleet sailed up the Potomac River. After defeating American defenses at Bladensburg, the British troops marched without opposition into the nation’s capitol, setting fire to the Capitol and White House. 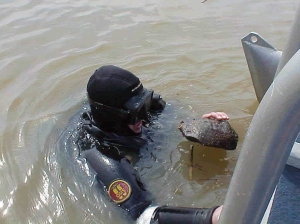 Over the last several decades, a number of archaeological investigations, both underwater and on land, have helped shed light on the War of 1812 in Southern Maryland. The sand and silt covering boat timbers discovered in 1979 during a survey of the Patuxent River yielded artifacts—a surgeon’s kit, a lantern, and a tin plated drinking cup—that indicate the vessel had been one of the Flotilla gunboats. Additional submerged vessels found in St. Leonard Creek in the mid 1990s appear to have been two gunboats scuttled by Barney in late June of 1814 after the Flotilla’s second engagement with the British. The location of the vessels, as well as their sizes and types of damage, all help confirm that they were the gunboats (JPPM 2009). Several seasons of underwater archaeological exploration of the Scorpion, the flotilla’s flagship took place in 2010 and 2011. This vessel had been discovered in the late 1970s in the upper tidal reaches of the Patuxent River. Visit http://www.scorpionarchaeology.blogspot.com/ for more information on this project.

Terrestrial investigations at Bladensburg, site of a September 1814 battle, were conducted in between 2008 and 2010 by the Maryland State Highway Administration in partnership with the University of Maryland, Prince George’s Heritage Inc., and the Amman Memorial Trust. More information on this project can be found at http://battleofbladensburg1812.com/Bladensburg/.

I can’t resist ending this post with a blatant plug for Jefferson Patterson Park & Museum’s exhibit, “Farmers, Patriots and Traitors: Southern Maryland and the War of 1812”. The exhibit, located in the museum’s Exhibit Barn, is open Tuesdays and Saturdays from 10 AM to 4 PM and Sundays from 12 PM to 4 PM, as well as during special events at the park. Along with informative panels, the exhibit features artifacts and images that help bring the exhibit to life and a short film providing additional War of 1812 facts. Visit http://www.jefpat.org/farmexhibit.html for more information.

Numerous print and web resources discuss in detail the War in Southern Maryland. These sources include the following:

The War of 1812 in the Chesapeake: A Reference Guide to Historic Sites in Maryland, Virginia and the District of Columbia by Ralph E. Eshelman, Scott S. Sheads and Donald R. Hickey (Johns Hopkins University Press, 2010).