Figure 1: This 25.5 x 23.5” plate from a five-plate stove is one of eight from the site that bear German or Pennsylvania Dutch motifs.

The Antietam Furnace (18WA288), more properly known as the Mt. Aetna Iron Furnace, operated between around 1761 and 1783 in what is now Washington County. Excavations conducted at the former site of the furnace revealed a number of industrial structures and evidence of the production of pig iron, hollow ware and stoves (Frye 1984).  Some of the most interesting artifacts from the site included stove plates containing inscriptions in German (Figure 1).

Although Antietam Furnace was not owned by individuals of German descent, proprietors Daniel and Sam Hughes apparently knew their local customer base well – of the eight complete or virtually complete stove plates that were recovered from the site, all were molded with German and Pennsylvania Dutch-style motifs in the forms of tulips, hearts, birds of paradise and blessings in German (Figure 2).  From its earliest beginnings, Maryland has been home to a large population of German immigrants and the Hughes brothers were banking on these stoves finding ready customers among them.

Figure 2. The German inscription on this plate reads “Give thanks unto the Lord for …”. The remainder of the inscription, which was continued on another plate, read “He is good”. This inscription is a portion of the first verse of Psalm 106. Illustration from Frye 1984.

Many of the first German immigrants arrived in the wake of the devastation caused by the Thirty Years’ War (1618-1648) or to escape religious persecution.  One of the first Germans in Maryland may well have been physician and explorer John Lederer, who settled in the colony in 1671 (Drake 2001). Several years earlier, in 1669, Lederer became the first European to crest the Blue Ridge Mountains and glimpse the Shenandoah Valley and Allegheny Mountains (Cunz 1942).  His explorations were published in 1672 as The Discoveries of John Lederer (Lederer 1672).

Another early German of distinction in Maryland was Augustine Herman. Herman, perhaps best known for his map of the Virginia and Maryland colony (1670), was naturalized as a citizen in 1673.  Lord Baltimore, in return for Herman preparing the map that established the boundaries of his grant, gave him a large estate in Cecil County. Herman named his estate Bohemia Manor.

The pace of German immigration picked up in the early 18th century, particularly into the Pennsylvania colony (Nead 1913:33-34).  By the early 1730s, some settlers had begun moving from Pennsylvania into Maryland, although the overall number did not become significant until several decades later (Nead 1913:38). In 1748, 2,800 emigrants from the Palatinate region of Germany  arrived in Maryland by way of Annapolis and Baltimore; most of these immigrants settled in and around what is now Frederick (German Marylanders 2014).  Also known as Frederick Town, this city was settled by German immigrants led by Johann Thomas Schley, a schoolmaster from the Rhineland Palatinate (Tracey & Dern 1987:150).  Within three years, Frederick had become the county seat of Frederick County and became an important center of commerce, mining and iron production.  Other early German settlements in western Maryland included Monocacy, Conococheague and Hagerstown. 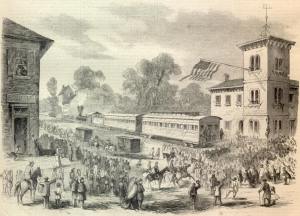 German settlers were particularly successful as farmers and merchants (Scharf 2003:64-65), but often faced discrimination in their new country.  The German Society of Maryland was founded in 1783 to protect and assist immigrants.  German language newspapers began in western Maryland as early as 1785, also helping immigrants adjust to life in the new American nation. Germanic culture and heritage have long been an important part of Maryland’s past and continue to be so today. A second large wave of German immigrants arrived in Maryland beginning in the nineteenth century; these immigrants’ impacts on Maryland’s history and culture will be the topic of a future blog.

Drake, Richard B. 2001  A History of Appalachia. Lexington, Ky.: University Press of Kentucky.

Lederer, John 1672  The Discoveries of John Lederer, In three several Marches from Virginia, To the West of Carolina, And other parts of the Continent: Begun in March 1669, and ended in September 1670. London, Printed by J.C. for Samuel Heyrick, at Grays-Inne-gate in Holborn. Available at http://rla.unc.edu/archives/accounts/lederer/lederertext.html.

Nead, Daniel Wunderlich. 1913  The Pennsylvania-German in the Settlement of Maryland.  The New Era Printing Company, Lancaster.