Figure 1. The double-sided comb has closely spaced teeth for removing the small lice.

When I found this vulcanized rubber lice comb in a Baltimore privy (Figures 1 and 2), I originally thought I would use it as a way to focus on public sanitation and the increasing importance of public health beginning in the second half of the nineteenth century.  It seemed that a discussion of drains, sewers, street cleaning and clean water supplies was in order.  But as I dug a little deeper into sources for the blog, another direction began to emerge.  With the arrival of winter, many people I know are battling the flu or actively trying to avoid getting it.  Thus, in this season of communicable disease, the comb became a way to discuss epidemics and, in particular, typhus epidemics.

Epidemics of communicable diseases have swept through human populations as long as our species has been in existence.  Smallpox, the bubonic plague, yellow fever, typhoid fever, measles and the influenza have caused millions of deaths over the centuries.  Epidemic typhus (not to be confused with typhoid fever), is caused by the Rickettsia prowazekii bacteria and can lead to death in up to 60% of untreated patients.   Also known as “jail fever”, “camp fever”, “war fever” and “ship fever”, typhus is associated with conditions where people are crowded together in conditions of poverty, filth and hunger. The cause of epidemic typhus was not understood until the early twentieth century, when researchers determined that human body lice (Pediculus humanus corporis) transmitted the disease to humans (Britannica 2014). 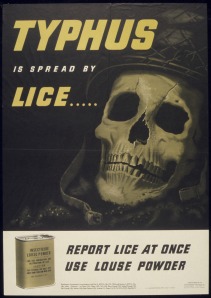 Figure 3. An American posters dating to World War II warns of the dangers of lice.  Poster in the collections of the National Archives and Records Administration.  http://commons.wikipedia.org/wiki/National_Archives_and_Records_Administration.

There were at least two recorded outbreaks of typhus in Baltimore in the nineteenth century (Cordell 1903: 701, 710).  The 1849 epidemic was confined largely to the Baltimore Almshouse, located on the former estate called Calverton (Norton 1981).  This outbreak may have been connected with the large influx of Irish immigrants who fled Ireland in the wake of the Potato Famine ravaging that country between 1845 and 1851. The other typhus outbreak occurred in 1870 (Cordell 1903:710).  The threat, at least, of typhus continued in Baltimore into the twentieth century.  A report on the city’s 1912 Public Health Week listed, among other displays on the dangers of and control of rats, models of privies, and maps of cholera and smallpox invasions, a chart showing recent research on typhus fever (Public Health Reports 1912:432).

The Baltimore comb was recovered from a well that had been reused as a privy until it was filled with household refuse during the third quarter of the nineteenth century (McCarthy and Basalik 1980).  Since the carriers of the typhus bacteria were still not known during this period, this comb was probably purchased as a solution for nothing more serious than a pesky case of head lice.

Cordell, Eugene F.  1903   The Medical Annals of Maryland.  Prepared for the Centennial of the Medical and Chirurgical Faculty. Baltimore.

One thought on “Epidemic Typhus in Baltimore”