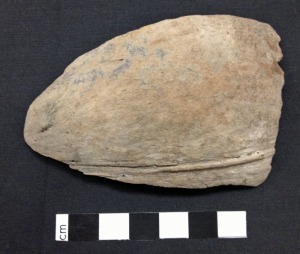 So, I have to admit that this week’s artifact is not the most attractive object I have used on the blog. In fact, since you probably can’t even identify it, I will tell you that it is a fragmented coconut shell. This coconut was enjoyed by a family living in the Otterbein neighborhood of Baltimore in the late nineteenth century and recovered from a cellar at the Federal Reserve Site (18BC27). Coconuts are obviously not native to Baltimore, preferring instead to grow in more tropical climes. Thus, this coconut shell can be used to launch a brief history of the Baltimore harbor, since it almost certainly arrived in the city via the port. I was inspired to write on this topic when I heard a story on the radio last week about the longshoremen strike at the Port of Baltimore.

Maryland’s General Assembly authorized the Port of Baltimore in 1706, twenty three years before the town itself was officially established (Brugger 1988). Named for Lord Baltimore, the original port was located at the head of the Northwest Branch of the Patapsco River, in what is today the popular visitor destination known as the Inner Harbor. Baltimore’s Mid-Atlantic location meant that the port remained relatively ice-free throughout the winter, allowing trade to be conducted throughout the year. The port was later expanded to include Fell’s Point to the east and southeast. In the nineteenth century it added Canton, located south and east of Fell’s Point. 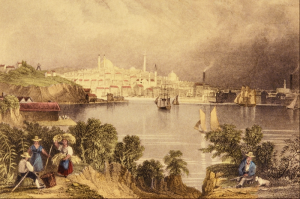 Figure 2. View of Baltimore by William Henry Bartlett, circa 1840.

Agricultural crops and other raw materials were shipped from Baltimore, and the port served as an entry for items brought in from other American colonies, Europe, the Caribbean and Africa. Although the city planners originally intended Baltimore to be a tobacco port, it quickly became a center for the export of grain produced in Maryland and Pennsylvania (Chapelle et al. 1986:115). Other important exports leaving Baltimore in the eighteenth and nineteenth centuries included pig iron, iron bar (Brugger 1988:66), tobacco, flour, and cotton (Bruchey 1969); in the mid-twentieth century steel, fertilizer, grain and coal passed through the port on their way across the globe (Chapelle et al. 1986:274). The proximity of the harbor fostered a number of industries in the city, including shipbuilding, canning and the steelmaking (Waterfront Partnership 2013).

The port continued its importance to the state’s economy into the twentieth century. Millions of tons of building materials passed through the port on the way to rebuild Europe after World War II (Chapelle et al. 1986:274). By 1966, port activities contributed over 1.5 billion to the state’s economy (Chapelle et al. 1986:274). Baltimore today is the 11th largest port for cargo in the United States, handling more than 30 million tons of cargo annually (WBALTV 2013). In the early twenty-first century, tourism in the harbor area is also an important economic driver for the city. 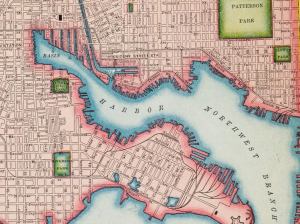 As of the posting date for this blog, the current strike is at least temporarily over (Baltimore Sun 2013). This strike is not the first of its kind for Baltimore. The October 12, 1936 edition of The Evening Independent reported on a strike that tied up about eighty percent of the tugs in the harbor (Evening Independent 1936). Without the assistance of the tugs in maneuvering, larger vessels were unable to safely enter or leave the harbor. One vessel even damaged two piers when it crashed into them after being caught by a gust of wind.

For the nineteenth-century residents of Baltimore, all manners of wondrous items found their way to their homes through the city’s port. It was their doorway to tea leaves from India, coffee beans from South America, pineapples from Hawaii, sugar from the West Indies and that first magical taste of coconut – perhaps made into “Cocoa-Nut Soup” using the recipe provided in Mrs. Beeton’s Book of Household Management (1861) or as grated into a cake (Goodfellow 1865).

Goodfellow, Elizabeth
1865 Mrs. Goodfellow’s Cookery As It Should Be. T. B. Peterson & Brothers, Philadelphia.